During Hortiflorexpo IPM Shanghai 2019 Viscon Group had the honor to present its automation solutions at the Dutch embassy party on April 20th. With the speech Viscon celebrated decades of experience with Chinese horticultural companies. Viscon values the long-term stability of relationships with Chinese horticultural companies and was therefore proud to present Viscon’s automation solutions in the agro and (non-)food sector during the Dutch embassy party at IPM Shanghai!

The focus of the Viscon speech was to emphasize the cooperation between the Dutch and Chinese horticulture sector. Viscon Group builds upon decades of experience in the agro and (non-)food sectors. Over 20 years ago the organization expanded its business to Asia. Over 10 years ago the Viscon China office officially opened its doors. Today, multiple greenhouse growers in Asia have recognized Viscon’s reputation for being a turn-key provider in greenhouse automation solutions.

Viscon values the long-term stability of relationships with Chinese horticultural companies and was therefore proud to present Viscon’s automation solutions during the Dutch embassy party at IPM Shanghai!

Adam Wang, General Manager of Viscon China, and Robbert-Jan in ‘t Veld had the honor to introduce Viscon in a speech, which was attended by different growers, government officials and horticultural companies. 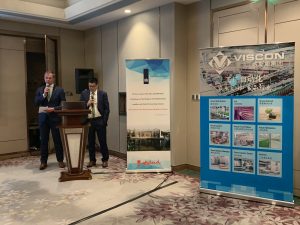 Robbert Jan in ‘t Veld, sales manager for Visser Horti Systems – which is one of the daughter companies within the Viscon Group – is optimistic about the organization’s future in China. “We look forward to maintaining the long-term relationship with Chinese horticultural companies”, he explained. “Thanks to our consistent efforts we will be able to provide high-quality support to Chinese companies locally.”